From “Professional Voice User” to Singer: My journey during COVID

Do you remember singing as a child? What are your earliest memories of singing?

I can remember making up songs and singing for my family from a young age. I loved being silly and creating funny lyrics to familiar tunes. I remember singing hymns in church and singing along to oldies in the car with my mom. I always loved to sing.

In elementary and middle school, we all had to sing in the choir. I went to a small Christian school, and singing was part of what we did. There was no differentiation between singer and non-singer in the class. We all used our voices. I sang in the choir, and I sang with friends. I was the lead in the 5th-grade musical, and I still remember an 8th grader listening to me and telling me what a great voice I had. Years later, I wrote a song for my 8th-grade graduation to sing on stage with four other girls from my class. I was unafraid of using my voice. 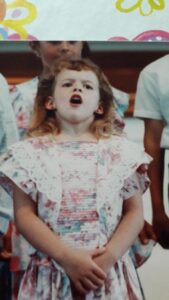 Singing my heart out in elementary school

I’m pretty sure I called myself a singer.

While I write this blog post, I’m trying to pinpoint the moment in which I decided that I was not a singer. As I became more serious about playing the piano and the flute in high school, I started singing less and less. In school, I chose orchestra over choir and never really looked back. I tried out for the lead parts in the musical (which never panned out) and still sang at church in some capacity. But, it became increasingly clear: I was not a singer. I was a pianist, and I was going to school to study piano.

I’m so grateful that social media did not exist when I was a senior in high school. I’m also thankful that camera phones did not exist. If so, there would have been evidence for the following story, and I would be forced to relive it anytime the video emerged. 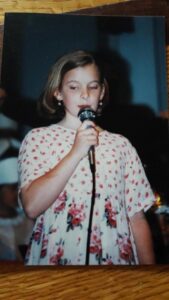 When I was a senior in high school, a friend of mine asked if I would sing a duet with her at our spring concert. She had an incredible voice, was confident, and was the person who got all the leads in the school musical. Despite being uncomfortable as a singer, I knew I could sing harmony. And, in this case, I only had to sing one line of the song alone. One line. That’s it.

On the day of the concert, I still remember standing on stage and practicing our song. Our director had brought in a friend to help coach us. He was telling me to better support my sound, to project, to take a deep breath. I felt suddenly more overwhelmed and more pressured than I ever had. I had gotten on stage to perform piano concertos and had never been this nervous for  5 seconds of solo singing.

What happened at the concert?

I still remember the feeling of the hot lights on me as I stood at the front of the stage beside my friend. I was gearing up for my solo, and when I went to sing, I took a deep breath, and nothing emerged except for air. Nothing. For those few short moments, it was as if I had lost the ability to sing at all. Even as I type this, I’m overwhelmed with a wave of discomfort. I’d rather push that memory and that feeling deep down than bring it out.

Was that the moment I decided that I was not a singer?

Or, was it during my music education college courses when I was surrounded by SINGERS who had perfect diction and effortless vibrato?

Was it during my time playing in bands when the lead singer never wanted me to add harmonies? Or, was it all of those collective experiences where I felt like my voice was inferior?

Facing the fear of singing alone

In 2007, I started my job as a public school teacher—one of the classes I was slated to teach was a high school beginning guitar course. Not only did I barely play guitar, I knew that teaching this course meant I would have to sing in front of students every day. On the first day of class, I had 15 boys walk into my classroom. 15 boys.

I was intimidated by their energy and their stature (many of them looked older than me!). I was shaking as I went to play and sing the first song my co-worker recommended we work on together, Jambalaya, by Hank Williams. I remember looking down at the floor, and as I played the last chord, a student named Sean blurted out, “Miss Allen! Your voice makes me want to run through fields of flowers! It’s the voice of an angel.” 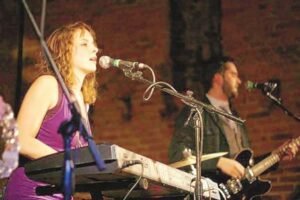 I started laughing and immediately felt the tension release from my body. My students liked my voice? They thought I was a singer?

In the years that followed, I started a new band with some friends. We couldn’t find someone to front the group, so I stepped into the role of songwriter and frontwoman. I started singing alone a lot. Each time I did it, I became more confident and learned more about what my voice could and couldn’t do.

I sang when I taught, I sang with my friends. I sang with my band. I sang a lot. I used my voice a ton. I even needed voice therapy at one point from overuse when I was recording my first album.

This past March, as the world shut down, I decided to reach out to a professional contact, Kat Reinhert, and see about getting voice lessons. I’ve noticed my voice changing over the past few years, and during my last studio recording session, I had a thought: “Could I be a singer? Could I have a voice that does what I want it to do?”

In one of my first lessons with Kat, I expressed my fear of calling myself a singer. I felt inadequate, untrained, and in many ways, unqualified to hold that title. She made the case that I was a “professional voice user” and that if I was still uncomfortable with “singer,” I could at least admit that I use my voice as a singer does.

For months, I’ve worked at gaining some agility and increasing my belting range. I’ve learned new practice techniques and worked on challenging songs. I’ve felt the physical and emotional gains of studying the craft of popular singing.

But, most importantly, I no longer consider myself to be a second class citizen in the world of voice.

I am a singer, and my voice is my own.

In an informal poll on Instagram, I asked a group of choral directors to share if they were uncomfortable with their voices. Many of them said they were. For something so profoundly connected to our identity (our voice), it surprises me that this wasn’t talked about more in my education. We focus so much on proper breathing and vowel shapes for choral singing and how to blend and balance. We talk about tone quality and phonation. We don’t talk about what it means to “be a singer” and how it affects our very identity.

Connections with the classroom

In the classroom, I mostly work with students who are singing for the first time, are too afraid to sing, or are just starting to explore their voice. I try to be kind, gentle and encouraging with them. I’m much less kind to my self.

Just as our students, we are on a journey to become better musicians. Our identity and worth does not lie in how we compare to the person beside us, nor does it compare to our perceived “end goal.” We can be in the middle of novice and expert and still own our work as a music-maker.

When I teach my students to use their voice now, I won’t just tell them how to make it sound a certain way. I will show them how using their voice connects deeply with their humanity and can spark life in those around them.

And, the next time I meet someone, and they ask what instrument I play, I’ll start by telling them about the instrument I use most of all:

How about you? Do you consider yourself to be a singer?