Skip to content
Home>Inspiration, Musicians, Songwriting, Stories, Teaching, Writing>The power of a microphone in a safe space
Previous Next

The power of a microphone in a safe space

I remember playing an original song at my first open mic night. I was 17 years old and a senior in high school. Until that point, I had written some original songs that I would play around with but never felt confident with my voice or playing to do anything with them. I met some friends at school interested in playing music, and we formed a little trio–acoustic guitar, keyboard, and vocals. My friend Leah had the most incredible voice I’d ever heard. If I couldn’t sing my songs, maybe she could?

If there were cell phone videos in 2003, I might have some evidence from the night. But, all I have is my memory–how nervous I was before we started and how I was afraid that others wouldn’t “get” our music.

We played two songs. One song was about a boy I liked and another song was about a friend I fought with. I can still hear the melody for “You say you’ve changed” in my head. It wasn’t my best work, by any means, but it was mine. And, I was playing it for strangers.

How did that performance go?

As soon as we walked off stage, flush-cheeked and full of adrenaline, I was approached by a man with a smile on his face. He told me that he ran an open mic in another section of the city and that we should consider coming to play there. I was convinced. Performing my music on stage was incredible, and I would continue to pursue it to this day.

In 2007, I was a new teacher. It’s hard to believe that I was just four years past the open mic experience that significantly impacted me. As a new teacher, I met so many students who wanted to play shows. They wanted to play their music in a space outside the school. I tried my best to help them navigate the musical landscape of our city, Philadelphia, and to give them advice I had. At the time, I was recording with a band and also working on booking shows. I learned alongside my students and shared everything I knew.

We were figuring it out together.

One common complaint was that there weren’t many venues that allowed shows for students who were under 21 years of age. AND there were no venues in the community around the school. No venues. No places for students to play music.

After a few years, I decided to find a space for my students. I made connections with a local coffee shop, Be Well Bakery and Cafe, and piloted our very first “music night.” (For more specifics on how I established this relationship and the results of a study concerning this project, check out my chapter in The Bloomsbury Handbook of Popular Music Education).

The power of the mic

It has been 7 years since our first music night at Be Well in 2014. Each time we host an open mic there, I am more convinced that this program is essential for students to find their voice. Last school year, our Be Well Show was just days before the school shut down due to the pandemic. It was the last time we made music together, unmasked, in a collective space. The memory of that night still sticks in my brain. If you were there,  you would have seen: 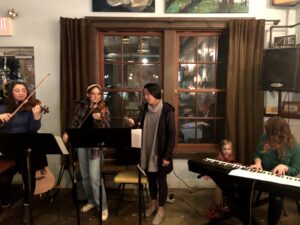 Students performing at Be Well on March 5th, 2020

You would have also seen a student volunteer running the sound system and the entire group of students working together to both set up and tear down the show. You would have seen the smiles on their faces as they nervously sat down after each performance and received applause and hugs from friends and family. You would have seen community and students finding their voice.

If your students know explicitly that you care about every learner and every way they express their musicianship, they will be more likely to share it with you.

So,  how do we encourage students to find their voice? To stand up in front of a class or a crowd and believe that they have something that needs to be heard and have the unique power to deliver what only their voice can do?  While I am still learning how to best support students every day, I have found the following points to be true:

Even with everything mentioned above, sometimes all it takes is a microphone and an invitation. I am floored every year when kids seemingly come out of nowhere to sing in my collaborative arts course or perform a spoken word piece at a Be Well show. I didn’t give them a personal invitation, and I didn’t tell them they had to perform. They were simply given access to a microphone and a safe space.

What about you? What advice would you give to other teachers trying to help students find their voice?