Viral teaching: How the coronavirus has changed my work

The start of corona

It would be extremely difficult to turn on the TV, radio, or even YouTube without seeing some form of announcement or article about the novel coronavirus — not so lovingly called “corona” for short by some of us who have found ourselves closest to it. The virus struck in the middle of what was supposed to be the most joyful week, not just in Chinese culture, but in several cultures across Asia.

It is a time when family members who have left their hometowns for the big cities come back to spend time together, a time when people gather to eat good meals together. It’s a time when children and teenagers collect hong bao (lucky money) from older relatives and brag to their friends on WeChat about the fancy new Nikes or Jordans they plan to buy. This is also the time of one of the biggest migrations in the world, seeing as China has a population of nearly 1.4 billion people. So, if there was a time for a virus to seek world domination, this would be the perfect opportunity.

I made plans to stay in China during Chinese New Year this year. Usually, I and many of my foreign coworkers take the two week New Year as a chance to travel. This year, I decided to stay home and get some serious snuggles from my dog Ollie and my cat Duke. I intended on getting as much relaxation as possible as I mentally prepared for the spring semester — the most hectic and fast paced time of the year for most teachers. I initially underestimated the social effect of the virus when it was first announced. The world has seen viral outbreaks many times in the past, and we have always gotten through them. What would make this time different?

I would quickly learn that living in the country containing first case of the virus would be the difference.

A change in plans

In my nervousness about the developing situation, I made a snap decision to leave, to go somewhere.

Initially, schools across China were closed until February 17th. We were instructed to continue school virtually in the meantime. Then, it was pushed to the 24th. Rumors were beginning to spread that Mainland schools would follow Hong Kong’s lead and cancel school until March 2nd. Along with school cancellations, several airlines in the United States — my home country — were beginning to slowly cancel flights from China to the US and there were the beginnings of strict 14 day quarantines happening to those who did enter.

The city where I live was considerably far from the epicenter of the outbreak. The city officials, shop owners, and shop workers in my little district were doing everything in their power to keep the spread in check. Even my apartment complex management set up a table outside of the gate full of different kinds of hand sanitizers and contactless thermometers. However, I was only able to receive updates from US media outlets, who consistently warned frantically about the scary deadliness of the virus, evacuations, time running out for foreigners in China to leave, and providing both accurate and inaccurate information as fact. As you can imagine, I began to feel a bit trapped.

In my nervousness about the developing situation, I made a snap decision to leave, to go somewhere. My decision stemmed from the fear of implications of being a foreigner in a country where mass panic was slowly bubbling. My fear was not of catching the virus.

I found myself being so envious of those friends and coworkers of mine who had already been in paradise when the virus struck — Thailand, the Philippines… where they could have a coconut on the beach while not catching a virus. I first wanted to join a group of them on the warm beaches of Da Nang, Vietnam…

until Vietnam closed its borders.

No worries! I had never traveled to the Philippines. I’d go there and catch some rays while I do online school…

then The Philippines closed its borders.

At this point, it was beginning to set in that I would probably be stuck somewhere. Did I want to be stuck in China? Stuck in Korea? Stuck in Japan? Stuck at home?

I chose being stuck at home.

So, after a harder than expected goodbye to my fur babies — and I am eternally grateful for the people taking care of them for me during this time — I bought my ticket and started preparing to go back to the states. 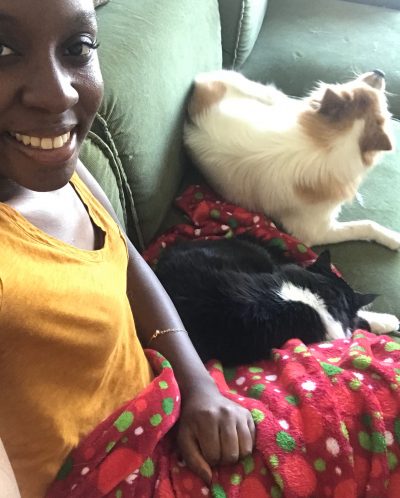 Naarah and her “fur babies” in China

The journey home was nerve-racking. There was only one route into Hong Kong airport and from there it was straight to the US. So many thoughts ran through my head. What if border regulations changed suddenly while I was in the air? What if after getting to the US, I would not be able to get back to China? What if I had to be quarantined? A wise friend advised me that thinking in “what ifs” was not healthy in this situation. She was completely correct about that but it was really hard not to. 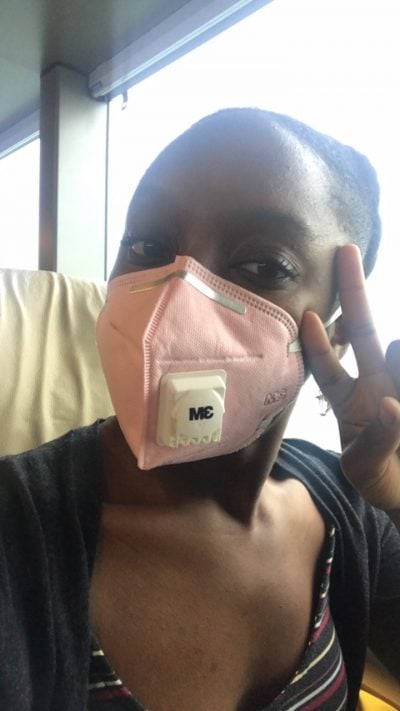 Once I was on the plane headed home, everything was smooth sailing. Almost too smooth. No one on my plane was quarantined, checked, or even given a health questionnaire once we landed. I was surprised. I had heard so many scary things about the border before I left China. My expectations were completely different than reality.

It was time to begin doing something that I never thought I would be doing given my career as a secondary choral and general music teacher: working the night shift.

After passing through immigration, everything was normal. There was hardly any talk about the virus. No more temperature checks, no more hand sanitizer, no more surgical masks. I was relieved, but also in some ways more confused. For an airport with so many passengers crossing through Asia, there seemed to be a great distantness for a subject that had been in the forefront of the minds of us in China for more than a week.

After 18 hours of travel, I arrived at my parents house where they happily and lovingly sanitized me and my luggage before hugging me and excitedly welcoming me home. The storm seemed to be over, for now at least. I was in a space far enough from the virus where I could think clearly and rationally about the situation at hand.

However, now that I was home, it was time to begin doing  something that I never thought I would be doing given my career as a secondary choral and general music teacher:

Online teaching across the globe

School was still happening. This was one of the aspects of this virus I actually welcomed. As a music teacher, our happy place is in our classroom, with our students, making music and sharing our passion with the next generation. Although teaching music online has its challenges, I was still happy to at least be providing somewhat of a constant for my students during this crazy time. If I’m being honest, I was happy that this was a constant for me as well.

The platform our school is using allows us to video chat, make calls, or message students both in large groups and individually. This has been a great way to connect with the students and be able to check in with them academically, socially, and emotionally. As a music teacher, however, online is probably the least productive platform to teach and definitely has its cons, but also some pros as well!

Besides the personal setbacks, there are some about teaching music in and of itself that I’m sure any music teachers reading this will have guessed by now.

So my final verdict? All of us, students and teachers, can’t wait to come back and get school started back as normal.

I am still going through this dance with corona. And while I am not personally affected by the virus itself, I feel very connected to the effect it has had in China. I learned that China really does feel like home. I didn’t even notice how much until now. It was much harder to leave than I anticipate

I learned that knowing the facts is the most important thing in a time like this. Clickbait articles are meant to strike fear into the reader, taking small negative instances and painting them to appear as if it’s happening all over the country.

I also learned that as nice as it is to be home, I’m equally as excited to go back… home. To hug my pets, my friends, my students, and just be happy when everything goes back to normal. I’m praying that day comes very soon.

About the Author: Naarah Callender

Naarah Callender is a music teacher in her fourth year. After graduating with her Bachelors in Music Education from Kennesaw State University, she embarked on her first journey to teach K-12 general music and choir in Seoul, South Korea. She has lived abroad for the entirety of her teaching career. From Korea to her present life in China, she has been enjoying every moment of adventure, challenge, and new understanding that comes with immersion in a different culture. Naarah lives with her dog, Ollie, and cat Duke in the Nansha District of Guangzhou, where she has been teaching middle school general music and choir for three years.